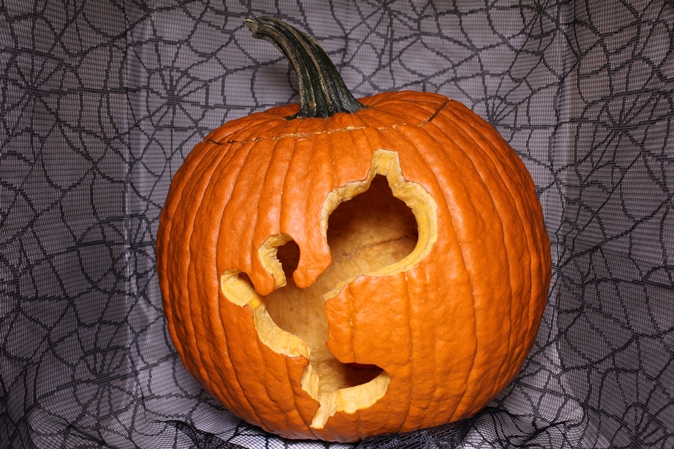 Originally, “Jack o’lantern” meant “man with a lantern,” but was later used to describe the lights that floated over bogs, swamps and marshes. Before science provided possible explanations for these lights, many believed the illuminations to be wandering spirits. Irish children carved lanterns out of turnips and carried them about, simulating the floating lights to scare friends and neighbors.

When the Irish immigrated to North America, they found pumpkins ideal for vegetable lanterns. With its hard, smooth outside rind, the orange Curcurbita was perfect for sculpting scary designs. Carving jack o'lanterns became a popular American Halloween tradition.

What was the real cause of the ghost lights? When Italian physicist Alessandro Volta discovered methane in 1776, he posited that the swamp gas interacting with natural electricity produced the swamp lights. Although his hypothesis did not receive much support at the time, it is now generally accepted that the lights are produced by the oxidation of phosphine (PH3), diphosphane (P2H4), and methane (CH4). Created by organic decay, these compounds can cause photon emissions. Only small amounts of phosphine and diphosphane mixtures would be needed to ignite the more plentiful methane to create the swamp lights.

An alternative modern explanation for the lights could be cold flames. These are luminescent pre-combustion auras produced when certain compounds are heated to just below ignition point. Cold flames are usually bluish in color and create very little heat. They occur in an assortment of compounds, including hydrocarbons, alcohols, aldehydes, oils, acids, and waxes. Whether cold flames occur naturally is not known, though many of the compounds which produce cold flames are the byproducts of organic decay.

Other modern hypotheses for the ghost lights include the bio-luminescence of fungus and insects, and the geologic phenomenon of piezoelectricity created under tectonic strain.

At CPG, we pumped our pumpkin full of liquid nitrogen, which we usually use for DMA, TGA, FTIR, and LC-MS. Because we're not just great at solving your polymer problems, we also know how to have some Halloween fun.