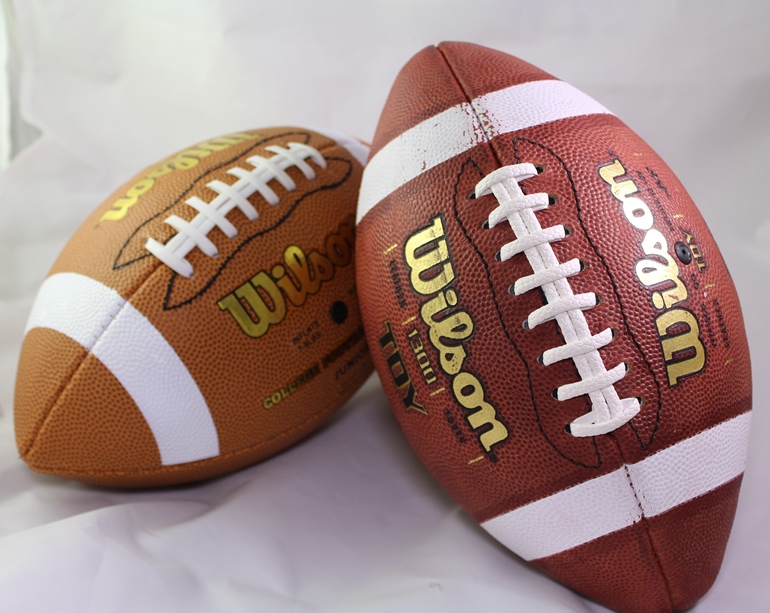 The argument of synthetic over natural leather in football and other sports, such as rugby or basketball, ultimately comes down to ball feel and grip. Rugby has transitioned to synthetic surfaces (and anyone who ever caught a high ball made from leather in wet conditions is grateful for that), but in football the preferred elite ball composition is leather.  Is that choice advantageous or is it purely a preference for the traditional? CPG scientists sought to determine how different the two types of footballs really are.

Fourier Transform Infrared Spectroscopy (FTIR) analysis confirmed that the leather football is comprised of animal hide, while the synthetic football is polyurethane-based. Not surprisingly, the FTIR spectra for the leather and synthetic material are markedly different.

Scanning Electron Microscopy (SEM) showed differences in the surfaces of the two footballs.  Natural animal hide is embossed to add the raised features into the leather football for improved friction.  The added topography increases the surface area of the football, making it easier to catch. Synthetic materials were designed to mimic the same embossed texture, yet the details of the microscopic fibrous nature of the leather are not captured in the man-made football (see below).

SEM micrographs of the surface of a leather (left) and synthetic (right) football. At higher magnification, the leather football appears fibrous while the synthetic surface is covered with small bumps on the order of 10 µm in diameter.

Images of ball testing configuration (left) on AR-G2 rheometer, and leather (middle) and synthetic (right) balls. Blue material is silly putty used as a barrier to enable water to be trapped in the contact region.

Under dry conditions, the synthetic material appears to have higher friction than the leather at all speeds.  In both cases, the friction force increases with compression load, suggesting the grip gets better the harder the ball is held.

The picture changes somewhat when the balls are wetted with distilled water.  The synthetic ball actually exhibits a marked drop in frictional force at higher loads (the leather ball also sees a slight decrease).  The leather ball would therefore have fairly consistent levels of grip, irrespective of how hard the ball were held, but the synthetic ball would have less grip at higher loads.  Although minor, this observation already indicates that the leather ball may have an advantage in less-optimal playing conditions.

When the balls are soaked in water, the difference is even more dramatic. The synthetic ball is impacted by the soak, but to the detriment of grip, with a gradual decrease in frictional force. In contrast, the frictional force on the leather ball goes up as the ball gets wet, suggesting in fact that this ball should have improved grip in wet conditions.

The weakness in this friction discussion is the choice of counterface.  Most players either use bare hands (in the case of the quarterback) or silicone coated gloves (in the case of receivers).  The steel counterface used here was a pragmatic choice, and may not truly represent the frictional force, which can be very sensitive to both the surface chemistry, and the conformability of the material.  Nonetheless, this simple non-destructive ranking experiment yields insights into why the leather ball is still the choice of the elite sport divisions. GO PATS!

Read more about these results in this application note.