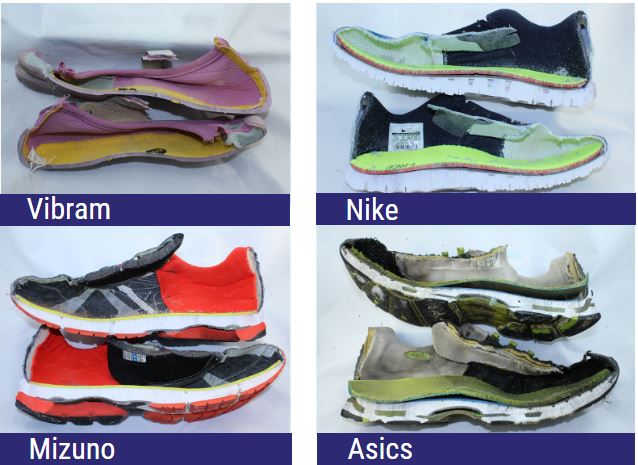 Running shoe technology has come a long way since Bill Bowerman, a running coach at the University of Oregon, first made prototypes by melting rubber into treads with a waffle iron in the 1960s, starting what would become Nike. As material technology improved, along with capabilities in analyzing running kinematics and physiology, shoe designs have gotten more complex, with complicated viscoelastic cushioning, designs to correct pronation, and lightweight materials to allow greater turnover speed. A book published in 2009, Born to Run, started a short but passionate trend backwards towards less cushioning and more minimalistic shoes. Since then, runners have cycled back towards more cushioned designs.

In preparation for the Boston Marathon on Monday, we decided to evaluate a few pairs of running shoes, comparing and contrasting at their viscoelastic properties and chemical properties.  Running shoes are typically made from various types of polymers, and may provide a great deal of cushioning, or very little at all! It is apparent that some of our samples have been used to run many miles, while others are more gently used. 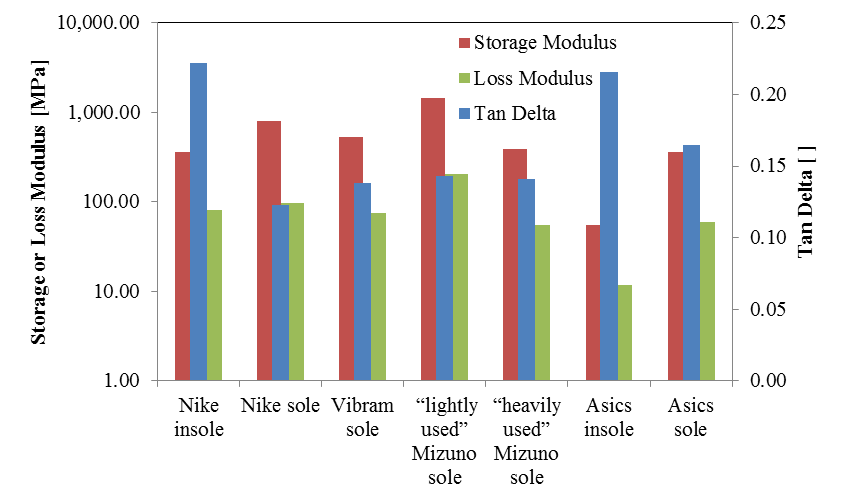 CPG used dynamic mechanical analysis (DMA) to measure the ability of the materials that make up the sole of the shoe to absorb and return mechanical energy. Storage modulus measurements are representative of the elastic portion of the stored energy, while the loss modulus measurements are representative of the viscous (or fluid-like) response of the material. Tan delta values may be interpreted as a “damping ratio,” characterizing the ability to which a material may absorb and dissipate energy. The above figure shows a comparison of the storage modulus, loss modulus, and tan delta for all shoe samples tested at a test frequency of 1Hz.

Significant differences in storage modulus were observed among the tested samples. Generally, storage modulus values for shoe soles was significantly greater than the corresponding shoe’s insole, a measure of the increased stiffness of the sole and softer, more compliant nature of the insole. Significantly higher storage modulus values were observed for the “lightly used” Mizuno sole than for the “heavily used” Mizuno sole, suggesting that the mechanical properties (and underlying materials) have degraded with prolonged use and environmental exposure, likely due to permanent compression of the porous structure in the sole.

Tan delta values (representing damping) were higher for the insole as compared to the corresponding sole, providing a measure of the ability of these components to dissipate energy during running, ensuring a more comfortable running experience—an important factor over 26.2 miles!

In order to perform a chemical comparison between the shoe samples, they were analyzed by headspace gas chromatography couple to mass spectrometry (HS-GC-MS).

Measured chemicals may come from the constituent materials composing each sole, from environmental interferences[1] (all shoes were sampled from a mildly worn state), as well as from thermal degradation during the headspace heating and off gassing process.

Some compounds identified in the Vibram sole include benzaldehyde, benzothiazole, decamethylcyclopentasiloxane, and BHT, suggesting the material contains significant silicone rubber elements. The benzothiazole is related to accelerators used for the crosslinking (vulcanization) of rubbers.

Some compounds identified in the Nike sole include n-butanol, α-methylstyrene, acetophenone, and butylated hydroxytoluene (BHT). These compounds suggest the sole is composed of a synthetic rubber rather than a natural rubber, due to the presence of styrene derivatives and possible degradation products. The BHT is likely added as an antioxidant to prevent material degradation during processing and usage. The n-butanol is likely used as a processing solvent during the rubber production.

Some compounds identified in the Asics sole include ethylhexanol, 1,2,3-trimethylbenzene, 2-pentyl-furan, acetophenone, 1-dodecene, 2,6-di-tert-butylbenzoquinone, and BHT. BHT is a widely used antioxidant and it is therefore not surprising to see its presence in each of the samples tested here.

Some compounds identified in the lightly used Mizuno sole include toluene, phenol, benzothiazole, acetophenone, and BHT. The toluene may be a residual solvent from rubber processing.

Headspace GC-MS is a valuable tool for exploring the chemical nature of polymeric samples, processing history, residual products, degradation products, and characterization of off-gassed species. Contact us for more information about HS-GCMS.