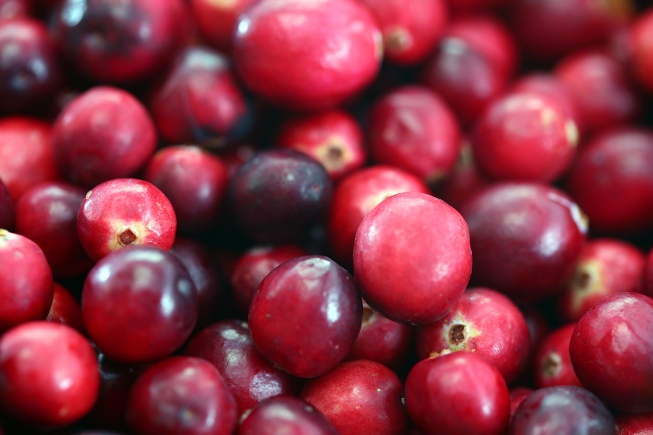 Some of us dread Thanksgiving - the prospect of awkward political discussions, family dysfunction, and, last but not least, the debate over home-made vs. canned cranberry sauce. This annual cranberry conflict seems like a subject fit for a Seussian Butter Battle sequel. Many households solve the problem by offering both a thick, homemade sauce and a can-shaped, store-bought jelly. In either version of the cranberry condiment, pectin polymerization plays a vital role.

Regardless of whether the sauce is made in the kitchen or factory, the first step is dissolving sugar in water. Once the sugar is dissolved, it is safe to add the cranberries. Heating the berries before adding the sugar will result in a runny pink liquid, unappealing to all.

Cranberries contain a great deal of pectin, a naturally occurring polymer found in the cell walls of plants. When the berries are heated, their cell walls pop open and break apart, releasing the pectin. Pectin is usually attracted to water molecules; however, if most of the water molecules are already bonded to sugar molecules, pectin polymers will bind to other pectin polymers, giving your cranberry concoction more structure. The linked pectin increases the viscosity of the sauce, thereby thickening it in a fashion similar to gravy.

Cooking the sauce for longer will release more pectin, increasing the stability of the sauce, and resulting in a more gelled dish.

Pectin has been used by the food and beverage industry for years as a gelling agent, a thickening agent, and a colloidal stabilizer. The pharmaceutical and biotechnology industries are also discovering applications for pectin; its distinctive properties allow it to be used as a matrix for drug delivery or cell/protein entrapment.

Cranberry is a Type-A Fruit

The American cranberry, one of only three fruits native to North America, contains large amounts of A-type proanthocyanidins (PACs). Cranberry proanthocyanidins are a varied group of polymeric structures made up of flavan- 3-ols, ranging greatly in size and structure. Unlike most other fruits which contain B-type PACs, cranberry’s A-type PACs have been shown to impede bacterial adhesion to cellular or biomaterial surfaces. Recent research published in Nature:Scientific Reports demonstrates that cranberry PACs interfere with bacteria’s ability to spread and become virulent.

So let’s all stop fighting about the preferred viscosity of our turkey condiment, and be thankful that the cranberry is a red beacon of hope in our war on drug resistant bacteria.