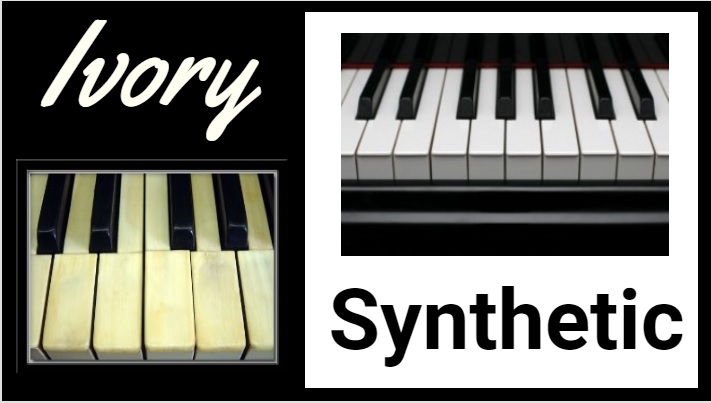 You may have heard the expression ‘tickling the ivories,’ referring to someone playing the piano. This expression of course results from the original coverings on the white keys of a piano, which were ivory chips from the tusks of elephants and walruses. White piano keys were usually made of spruce or basswood so that the key was light and could provide a fast action, and then clad in ivory on the top and front of the key only. The black keys were made of ebony, a dense hardwood. Ivory was abandoned by the piano industry in the 1970s, and any imported piano containing ivory keys must have providential documentation showing it was made prior to the importation ban, or it will have the ivory removed from the piano.

For a while after the ivory ban, keyboard manufacturers simply used injection molded plastic as the white keyboard cover, but the material, usually ABS, did not have the same feel as ivory, and piano-players became disgruntled due to the slipperiness of the plastic keys. In response, material scientists began experimenting with alternative synthetic formulations that would yield a similar feel as ivory. Yamaha produced a material called Ivorite, which is believed to be made from ABS with mineral reinforcement. A few manufacturers use nitrocellulose fiber reinforced with silica filler (Kawaii’s Neotex and a material called Pyralin). Various other ivory-replacement compositions include Ivorine and Ivoplast. Yamaha also experimented with white keys made from casein (from animal milk), reinforced with elastomers for improved impact strength, and then hardened with formalin. In addition to the formulations, manufacturers worked on micropatterning the surface of keys, adding porogens to create porosity, and inducing specific surface roughness during molding so that the keys have a similar friction to ivory, and will also have some absorptivity of perspiration and skin oils to reduce the slick feeling of plastics. This micropatterning provides a similar tactile action to ivory keys, according to these manufacturers.

One key (sorry) benefit of the non-ivory keys is their resistance to yellowing, an issue with the older ivory keys. Additionally, it was always challenging to match the color and porosity of ivory keys, in addition to the size of each key, so ivory keyboards tended to have a non-uniform appearance. For those who still clamor for the feel of ivory in a non-synthetic source, some piano companies will make key covers out of oxbone or other non-endangered animal bones. Most piano players prefer tickling the white uniformity of synthetic keys.