It isn’t only Ghostbusters that have to worry about being slimed! Last Friday, chaos ensued when 3,400 kg of hagfish were accidentally deposited on a highway in Oregon.

This slimy traffic accident reminded us of work we performed a few years ago in collaboration with Prof Douglas Fudge on understanding quite what is going on when these animals are disturbed.  These evolutionary throwbacks are generally considered the vultures of the deep sea, feeding off carcasses and debris at the bottom of the ocean.  Their skin is often used as a faux eel-skin, but to an engineer the most fascinating aspect of this animal is the slime it produces.  When attacked, the animal responds by generating copious amounts of slime; although relatively small animals, they can generate gallons of gel almost instantaneously.

It turns out these animals have evolved this spectacular defense based on two physiological components.  There are 150-200 slime glands spaced along the body of the animal.  In each gland are thread cells of about 150 microns in size, but composed of a single wrapped 1-3 micron filament that is 10 -20 cm long.  Along with this cell are high molecular weight mucous glycoproteins in vesicles.  These components expand rapidly upon exposure to water; the vesicles provide an elastic gel-like matrix, while the fibers entangle and hold the gel together.

We performed rheology on hagfish glycoproteins in an attempt to understand the assembly and gelation mechanisms (presented at the Society of Rheology in 2003) with evidence of a yield stress and elasticity, and a strong salt influence.  In the end though, perhaps the most interesting aspect is the manner in which the hagfish clears itself – it simply ties itself in a knot and “slides” the gel off itself. 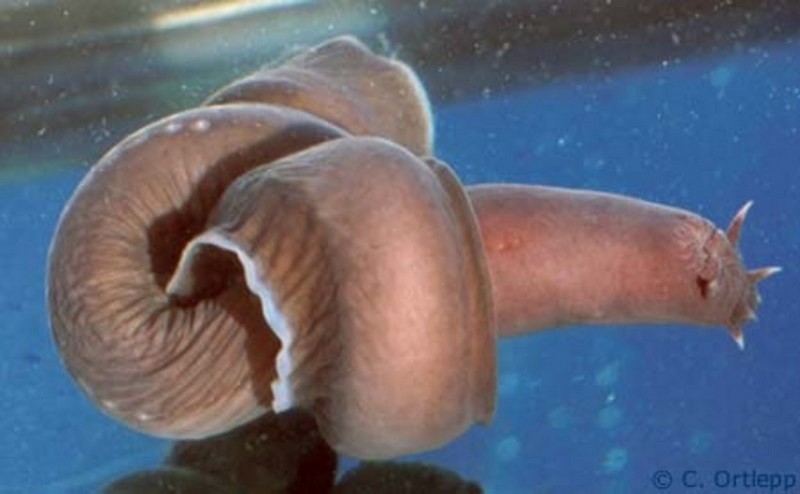