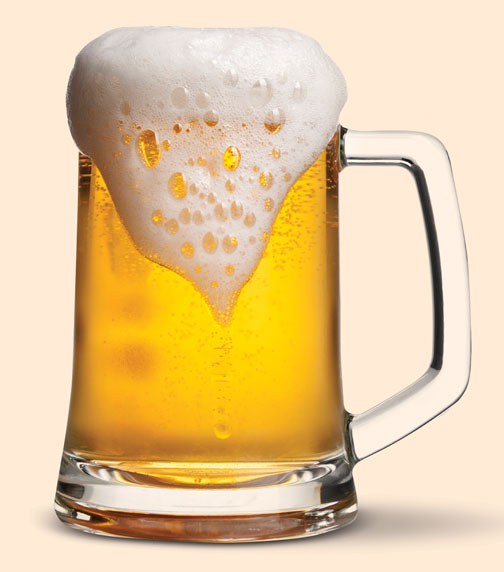 The normal effects of beer consumption are well known.  The ethanol in beer enters the blood stream and eventually makes it to the brain, where the ethanol molecules can sit between brain cells and interfere with neurotransmission, the electrochemical process that controls the activities in the brain, such as body movement, communication, and general thought processes. Too much beer, or ethanol, in a short period of time can interfere with neurotransmission to the point that the imbiber loses control of one or more of these brain processes, leading to classic signs of drunkenness (unsteadiness, impulse control issues, memory lapses, and potential unconsciousness). Excessive drinking for prolonged periods of time can also lead to heart disease, generically termed cardiomyopathy, which is any disease that impairs the ability of the heart to circulate blood effectively.

A study conducted in 1965 in Quebec and Nebraska of beer drinkers who showed unusually high levels of cardiomyopathy resulted in an unexpected source of drinking-related issues with the heart. In Omaha, Nebraska, in a study of 50 patients, a spike in cardiomyopathy was observed starting in 1964. A similar trend was observed in Quebec around the same time. During interviews, clinicians learned that both sets of patients were frequent beer drinkers, and that each set of patients were drinking the same beer local to their area. The one complicating factor in the Quebec case was that Montreal beer drinkers had access to the same brand of beer, but did not have the spike in cardiomyopathy. Clinicians discovered that breweries in both Omaha and Quebec started adding cobalt sulfate to the beer to stabilize the foam. This practice was employed to counter issues with beer foam dissipation in inadequately cleaned glasses due to poor rinsing of  detergent by the bar staff (yet another issue).

Too Much of a Trace Metal

Cobalt is a metal commonly used in alloys, and is also part of the metabolism mechanism in all animals. However, too much cobalt can cause issues, such as interference with the Krebs cycle and aerobic cellular respiration. Studies where guinea pigs were administered cobalt into the myocardium resulted in diminished contractions of the papillary muscle.[1]  The clinicians felt that the beer drinkers in Quebec and Omaha were exposed to higher than normal levels of cobalt, which resulted in their cardiomyopathy.

So why the difference between Montreal and the rest of Quebec? For the larger breweries, such as those found in Montreal, separate batches were made for draft beer and bottled beer. Since the bottled beer normally was not put in glasses, no cobalt sulfate was added, hence fewer beer drinkers were exposed to high levels of cobalt sulfate. For smaller breweries, such as those found in Quebec, single batches were made for both draft and bottle, resulting in high levels of cobalt sulfate in both forms of beer. Researchers coined the phrase ‘beer drinkers’ cardiomyopathy’ based on this study.[2] Cobalt sulfate adulteration of beer was discontinued after this study came out.

Trace analysis of metals, such as cobalt, is normally measured in food and polymer products with inductively coupled plasma mass spectroscopy (ICP-MS). Contact CPG for assistance in trace metals analysis in your materials.