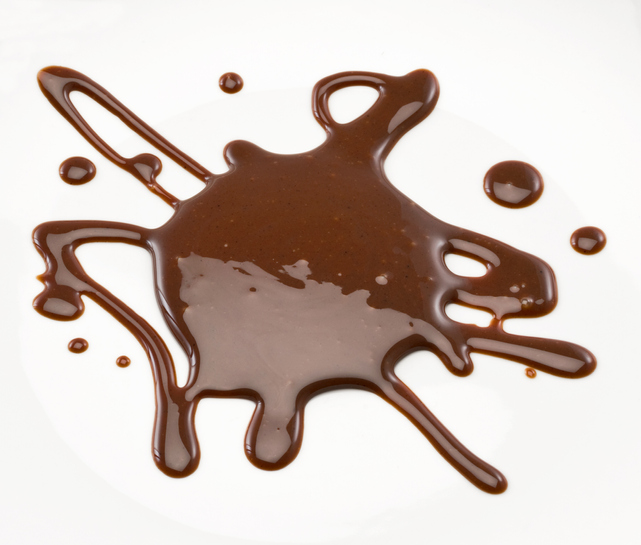 Last summer, we wrote about a hagfish accident that covered an Oregon highway in slime.  Another sticky situation has come to our attention – on May 9 at 5:30 a.m., a tanker of liquid milk chocolate flipped over on the A2 in western Poland, spilling a dozen tons onto the six lane highway. Until authorities closed the motorway, drivers continued to drive over the spilled chocolate, tracking it a mile in either direction.

Cleanup crews sprayed the congealed chocolate with hot water to re-melt it and wash it off the road. Additionally, a bulldozer pushed chocolate sludge off the motorway – a technique also used to clear the Oregon highway of hagfish slime.

"Removing the chocolate will take a couple of hours. The chocolate congeals on the pavement, and it's worse than snow," one member of the fire brigade told TVN24.

At the time of the accident, the temperature in Slupca, Poland was 12 °C, a bit lower than the 20-25 °C usually considered room temperature but not nearly as cold as the 0° to -4°C of a Western Polish January.  What if the temperature had been much lower? Could cars and people have been trapped in the sugary non-Newtonian fluid as it quickly cooled, like the victims of the 1919 Boston Molasses Flood?

The ease at which drivers sped through the spilled chocolate seems to indicate the muck was not impassably sticky. The air temperature must have been warm enough to keep the flow thin enough to allow for mobility. Fortunately, injuries from the May 9th accident were limited to the tanker driver’s broken arm and a reporter’s wounded pride after slipping into a chocolate-filled ditch.

Our CPG application note on chocolate mentions the importance of slow cooling for successful chocolate tempering. Did the change in temperature from tanker (>28 °C) to brisk morning air (12 °C) allow for proper tempering of the highway chocolate? The brown goo would have cooled too quickly for optimal confectionery quality. Probably a moot point, considering highway chocolate will never meet the quality standards of 21CFR163, Subpart B: Requirements for Specific Standardized Cacao Products or EU Directive 2000/36/EC. The only consumers of the Slupca spill are likely to be local wildlife.