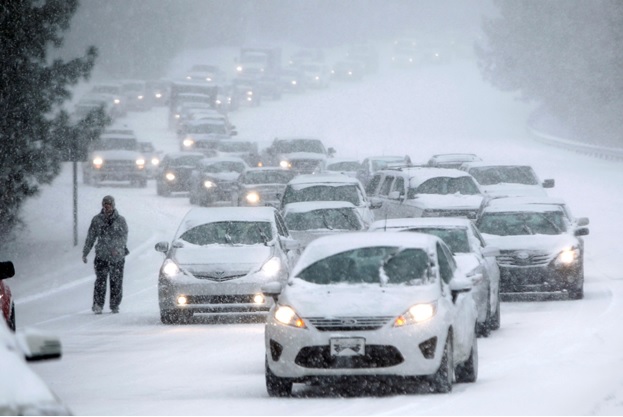 As the Boston area cleans up after another Nor’easter (New England’s name for a blizzard), we considered the practice of salting roads during and after these winter storms. If you have observed this practice, you will first notice that the salt used on roads bears little resemblance to the salt on your dining room table. The latter is mostly sodium chloride (NaCl), with the occasional trace amounts of other salts that provide pink hues or subtle flavors, a trend more popular in recent times (region-specific salts). Road salt, on the other hand, is a mix of sodium chloride, calcium chloride, as well as other chloride-based salts (potassium, magnesium). Since sodium chloride is fairly corrosive to roads, cars, and plant life, calcium chloride is used in combination more often. Road salt is usually  blue or yellow in color. The actual salts used in road salt are all white. Manufacturers likely add a chemical indicator to provide a color tint, so that road work crews can see where they have salted.

The salts in road salt are highly soluble in water. When salt is placed in contact with ice, the local contact of the salt depresses the freezing temperature of the ice, which is normally 0°C (32°F). By freezing at a lower temperature, this means that the ice has to be held at a lower temperature to remain solid. For sodium chloride, this reduced temperature is -21°C (-6°F) under controlled conditions. Practically, sodium chloride will only melt ice when the roads are around -10°C or higher.  The application of salt is the same as locally heating the ice above its melting point.

What is happening on a molecular level is that the ions from the salt (say Na+ or Cl-) want to associate with the water molecules in the ice. In the thin layer of water that sits on top of the ice, salt ions are sitting in solution at a fairly high concentration. Since nature does not like a concentration gradient, it sends more H2O molecules from the crystal structure into the liquid layer to try to dilute the salt concentration. Aside from the solubility of the salt in water, the amount of melting only depends on the concentration of salt, not its chemical nature, which is why this process is called a colligative property (e.g. it only depends on the concentration of species, not their chemistry). Elevation of boiling point is another colligative property. So as long as the salt concentration remains sufficiently high, it will continue to melt the ice underneath, and make the drive through New England towns a bit safer.