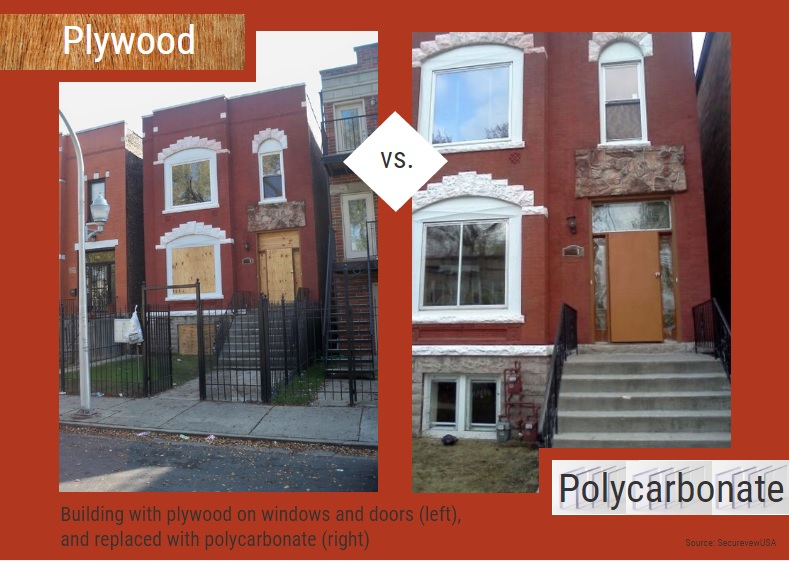 An abandoned house or factory building is often associated with windows boarded up with plywood. Over time, glass windows can break due to neglect or vandalism, and the plywood boarding helps prevent rain, snow, and debris from entering the building. The appearance of plywood boarding, however, draws attention to the abandoned nature of the building, and can shield illicit activity inside the building from the eyes of neighbors and law enforcement.

Several communities have converted to polycarbonate sheets instead of plywood. Polycarbonate is a transparent plastic that is much tougher than glass, which will help against breakage, yet has the same appearance as glass, effectively improving the curb appeal and inhibiting illegal activities inside the property. The technique of using polycarbonate sheets is called ‘clear boarding,’ and is being mandated by Fannie Mae on its vacant properties. Polycarbonate is used for bullet-resistant glass found in banks and armored cars, as well as windows for airplanes, motorcycles, helicopters, and some screens for electronics. Polycarbonates were first found in the late 1800s, but finally commercialized in the 1950s.

Two potential downsides to clear boarding are the cost, which can be upwards of 6 times as much as plywood, and challenges with entry by firefighters. The tough nature of polycarbonate requires firefighting personnel to cut through the polycarbonate enclosures with saws, rather than breaking them with axes. Proponents of clear boarding suggest that the reduced chance of property damage and illegal activities will offset the cost and reduce the likelihood of arson or accidental fires.