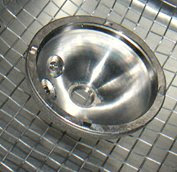 In 2000, the orthopedic community received a wake up call when one manufacturer, Sulzer, began to receive notices from surgeons that one of their acetabular shells, the InterOp, was failing to show osseointegration in a number of patients after a few months. The InterOp was designed with a titanium porous back to allow fixation by bony ingrowth. A thorough investigation ensued to determine why osseointegration was occurring for some patients. A number of consultants and laboratories, including Cambridge Polymer Group, were enlisted in this investigation.

Following a few months of analysis, it was determined that two key manufacturing step changes resulted in the poor outcomes. Firstly, Sulzer introduced an additional lathe-turning step following the porous titanium coating sintering process. The lathe-turning step introduced a lubricating oil into the porous backing that was insufficiently removed during the cleaning cycle. Any lubricants introduced prior to the titanium sintering process would be burned cleanly away. The second manufacturing step change was the removal of a nitric acid passivation process. Passivation is normally included in metallic devices to clean away any iron-based fragments introduced by machining tools.

In the end, it was postulated that an endotoxin residing in the oil was responsible for the lack of osseointegration. Such an endotoxin would be readily removable with nitric acid passivation.

In the end, patients with failed InterOps received replacement devices, and a new ASTM sub-committee was formed to develop standards for determining cleanliness of medical devices. Device cleanliness has become a standardized test for medical device manufacturers.

More information on medical device cleanliness can be found here.