Accelerated aging protocols are key to medical device development. For initial product design, manufacturers of medical devices would like to know how their devices will respond to an in vivo environment, for a time period that could extend to decades in the case of permanent implants. For product labeling and regulatory, the manufacturer needs to be able confidently report an acceptable shelf-life for their devices before implantation or use. Shelf-life timeframes are often 2 years, and sometimes as long as 5 or more years. Clearly, this extent of time is too long for a real time aging study at room temperature.

As a result, manufacturers turn to accelerated aging protocols. For shelf-storage, there are a few ASTM methods that are used by device manufacturers. The most popular technique is described in ASTM F1980, which uses increased temperature to accelerate the kinetics of degradation of the materials. In this method, samples are usually placed in a convection oven for a period of time in their final packaging. A relatively simple expression is used to compute the accelerated aging factor, AAF

where Ta is the accelerated aging temperature, Trt is room temperature, and Q10 is an aging pre-factor that depends on the material. Ideally, the Q10 parameter is determined by comparing real time testing to accelerated aging testing, picking a parameter (such as tensile strength) to monitor. By measuring this parameter at multiple times during the aging study, one can construct a relationship between this property and aging time. Determining the equivalent amount of time to reach the same change in property at the different aging temperatures allows you to calculate your AAF. Know AAF and Ta, you can now calculate Q10 for your material. The Q10 will sometimes depend on temperature, as shown in the bottom graph. This plot was generated using the variable Q10 method, whereby short term real-time aging data was extrapolated to long term values as indicated. 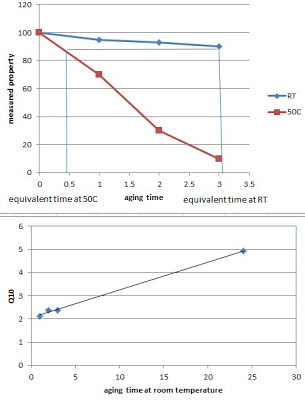