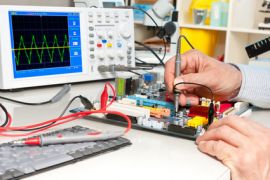 Cambridge Polymer Group designs custom instrumentation focused on material characterization. We have designed novel equipment to measure swelling behavior, extensional flow response and tack response, as well as other general mechanical and chemical properties. Our engineers are Certified LabView Associate Developers, and can write custom LabView code for instrumentation control and data analysis. Contact us if you're looking for assistance in designing and fabricating a custom instrument.

CPG was approached by a surgeon who had a concept to prevent deep vein thrombosis using a controlled pressure system. The surgeon needed data to prove the concept, as well as a working prototype. CPG engineers developed a breadboard system that allowed the surgeon to conduct clinical studies to collect the relevant data. As the next step, the engineers developed a working prototype for the surgeon to take to potential investors.

An instrument manufacturer was receiving a number of customer requests for an add-on feature to one of their analytical instrument. The number of requests did not warrant a full scale development project within the company.  A solution was found via a partnership with CPG who's engineers efficiently designed and built the add-on feature, allowing the manufacturer to maximize the utility of its own engineering assets while meeting all customer requests.

A medical device manufacturer wanted a demonstration test to allow their sales representatives to differentiate the manufacturer's stent product from the competition in a clinical representative test. CPG designed and built a custom fatigue system that subjected the stents to three modes of deformation, and included a system to detect when the stents broke.