Pharmaceutical excipients are inactive substances added to pharmaceutical products for purposes other than a direct therapeutic effect. The most common roles of polymer-based excipients in pharmaceutical formulations are as disintegrants/drug delivery vehicles, fillers/binders, viscosity modifiers, and coatings. 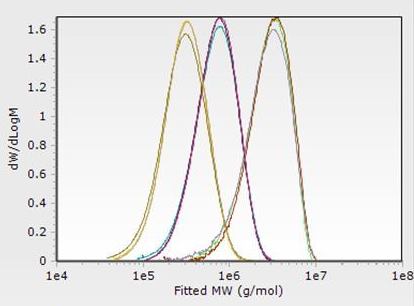 Pharmaceutical formulations typically employ polymer excipients for a variety of functional purposes. Measuring properties such as the molecular weight distributions (above) of such compounds can directly inform differences in material functionality.

Disintegrants such as cyclodextrin are added to allow the tablet or capsule to break apart and dissolve and release the active pharmaceutical ingredient (API). The chemical nature of the disintegrant as well as properties such as the polymer’s molecular weight may be tuned to affect the rate at which the tablet or capsule breaks apart and therefore affect the release kinetics of the API.

Polymers used for drug delivery such as polycaprolactam essentially play a similar role to that of disintegrants but break down a significantly longer period of time, allowing for prolonged drug delivery that may occur over durations of days to weeks or even months and may be localized in a specific site for a more targeted drug release. As with disintegrants, the polymer properties and overall device morphology may be tuned to modify the API release kinetics and overall residence time of the polymer.

Hydrogels are a special class of materials that may serve as vehicles for drug delivery. Their highly hydrated, porous network nature allow for APIs to elute from the matrix at a rate that may be tuned depending on the hydrogel chemistry, the crosslink density, overall morphology, degradation kinetics, and affinity for the API itself.

Polymer based fillers/binders such as methyl cellulose or polyethylene glycol are added to a formulation to maintain mechanical integrity during packaging, shipping, and handling. They also allow for APIs which are provided at very small quantities to be effectively “diluted” into a larger capsule or tablet form for ease of handling.

Polymer based viscosity modifiers such as hyaluronic acid or hydroxyethyl cellulose are added to liquid pharmaceutical formulations to prevent APIs from precipitating or settling out of solution—ensuring the API is uniformly dispersed throughout the liquid product. Tracking the rheological properties and molecular weight distributions of such polymer solutions yields valuable, actionable information about the efficacy and stability of these formulation components.

Polymer based coatings such as gelatin prevent premature tablet dissolution (e.g. the coating may be “triggered” by gastric acid pH), protect the tablet from mechanical damage, can further modify API release kinetics, and can also be pigmented or labeled for tablet identification purposes.

How CPG Can Help

Cambridge Polymer Group can help your team characterize such polymer based excipients in the context of your overall product and process constraints. Such characterization may include: