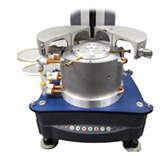 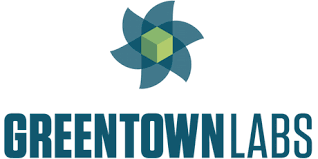 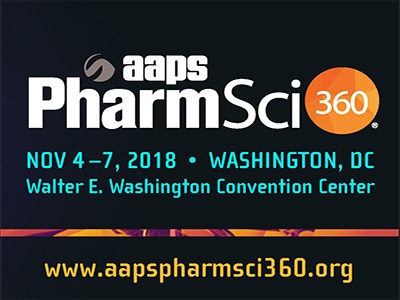 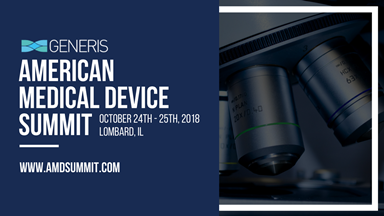 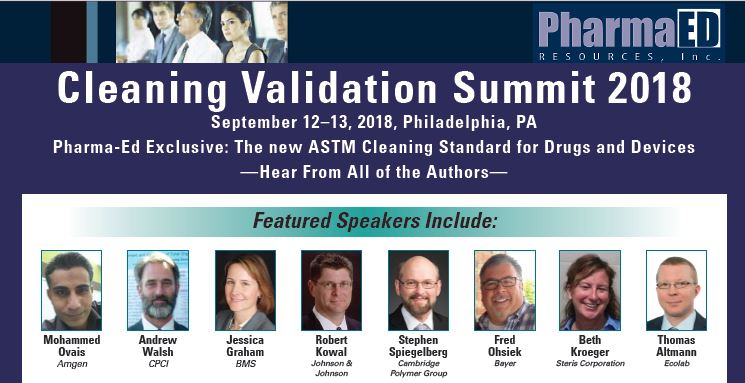 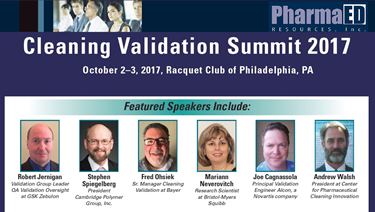 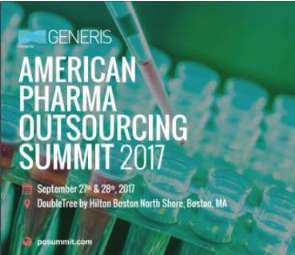 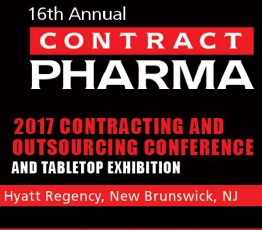 Cambridge Polymer Group’s team of hydrogel scientists are developing a hydrogel that can be injected as a liquid through a fine needle or cannula, and then gels in the eye. This hydrogel will assist in keeping the retina attached to the back wall of the eye, and will then degrade over time, obviating the need for a second surgery. The hydrogel should also allow vision through the eye while it is in place, resulting in greater patient mobility and compliance. 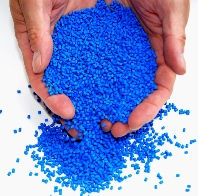 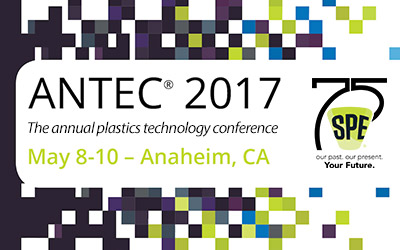 Cambridge Polymer Group is pleased to announce that the American Association for Laboratory Accreditation (A2LA) has approved our company for ISO 17025:2005 accreditation. 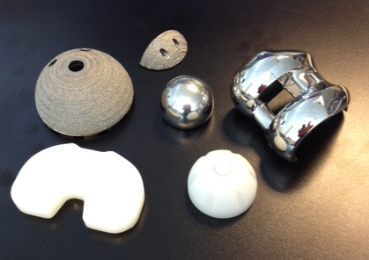 CPG's webinar on cleanliness in medical devices included examples of what happens when cleaning processes are not properly verified and validated, how to establish the number of samples to test, how to test for device cleanliness, and how to establish acceptable residue limits.

Dr. Stephen Spiegelberg is the chairman of the ASTM task group on Medical Device Cleanliness, and Dr. Gavin Braithwaite regularly consults on cleaning issues in the medical device area.

To listen to a recorded version of the webinar, register here.

CPG researchers, along with orthopedic surgeons from the Massachusetts General Hospital, have received a U.S. patent for a low cost navigation system designed to assist surgeons in aligning the acetabular cup used in hip replacement surgeries. The patent was issued as patent number 9,554,731. 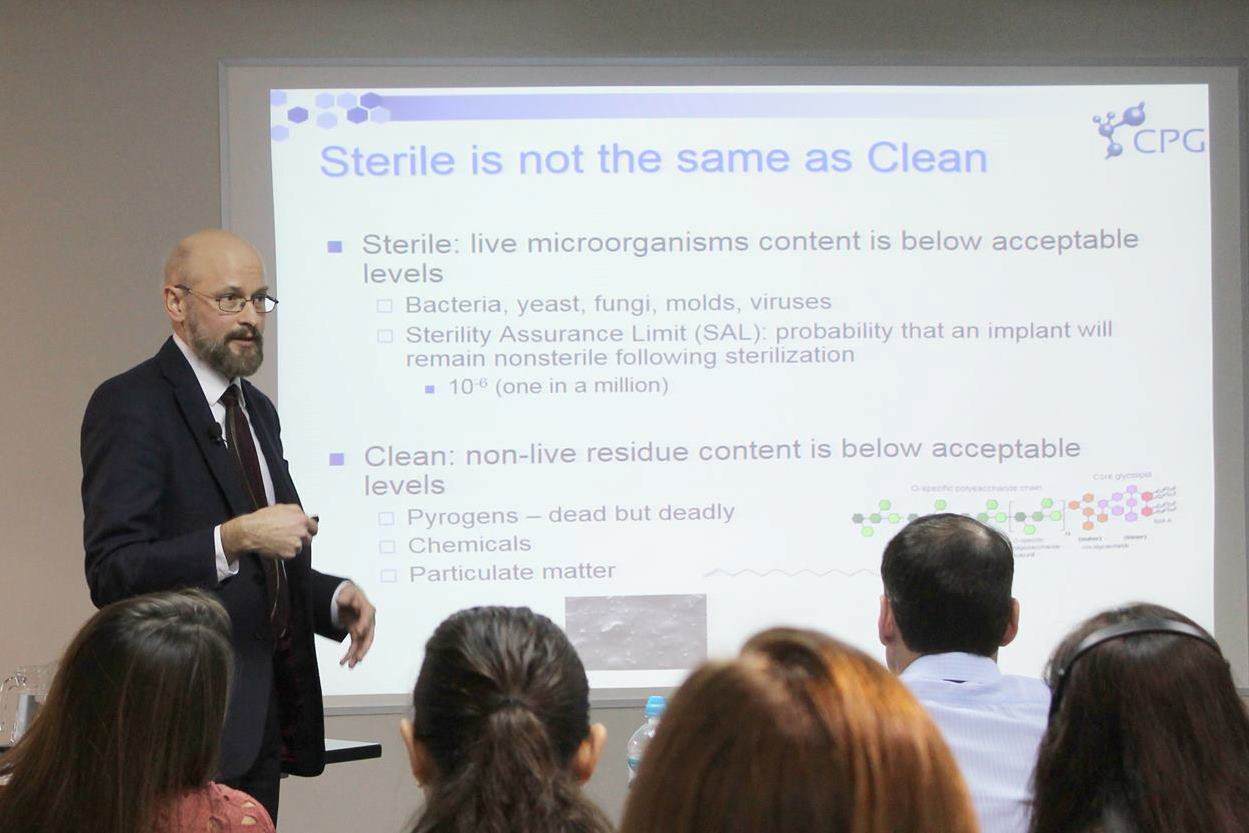 Scientists from the FDA, American Dental Association, medical device companies, and contract research laboratories were asked to present to Peruvian medical device regulators and manufacturers on how ASTM standards benefit their organizations in helping to get safe and effective medical devices into the patients who need them. Peru has a keen interest in improving their adoption of standards for material and product testing in order to market safe products both in Peru and outside of Peru.

Dr. Stephen Spiegelberg from Cambridge Polymer Group spoke about his ASTM task group on Medical Device Cleanliness, and provided examples of what can go right and what can go wrong when ASTM standards are not properly used, particularly with respect to validation of medical device cleaning lines.

Read more in this ANSI article and this ADA article. 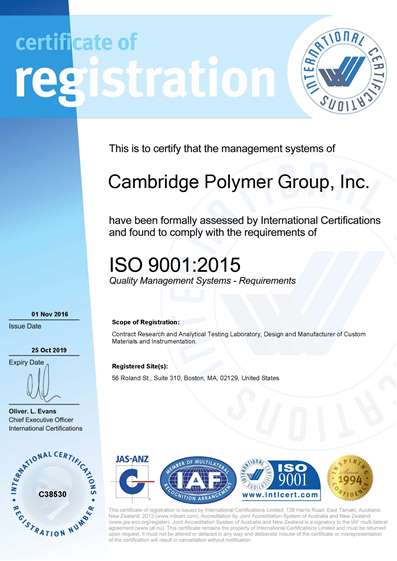 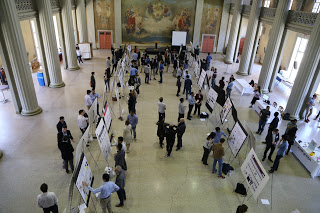 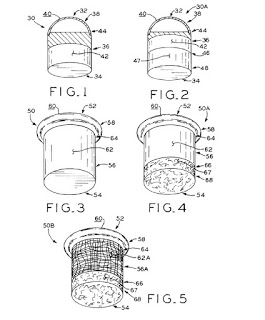 US Patent 9,289,302 was issued on March 22, 2016 to CPG researchers. The patent describes designs and methods for making implants for focal cartilage tears in load bearing implants, such as hips and knees. The construct designs make use of a surgical procedure termed mosaicplasty, whereby a plug of healthy osteochondral plug is removed from a non-load bearing portion of the joint, and placed in a drilled out cavity in the focal defect. In this patent, synthetic plugs are created based on hybrid structures of polymers and metal repair the focal defects. 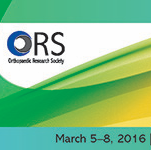 CPG researcher Adam Kozak co-authored a Journal of Mechanical Behavior of Biomedical Materials article. Along with co-authors from UC-Berkeley (Ansari, Gludovatz, Ritchie, and Pruitt), these researchers investigated the sensitivity of ultra high molecular weight polyethylene (UHMWPE) to fatigue when stress concentration sites are present in the form of notches. The authors investigated 3 formulations of UHMWPE commonly used in hip or knee implants today, and found that the sensitivity to crack propagation resulting from fatigue was more sensitive to microstructure, such as crosslink density, rather than specifics of the notch geometry.

Over two years ago, CPG purchased a Zeiss EVO LS15 environmental scanning electron microscope.  This instrument has become a work-horse for root-cause analysis, surface topographies and (through the attached Oxford EDS) elemental mapping.  With the large chamber and capability to run in “wet mode” (hydrated at elevated pressures) it has also proved invaluable at imaging hydrogel structures and friable materials such as foods and tissues.

As part of an effort to improve the resolution of the instrument, CPG recently procured a Herzan AVI-400 antivibration solution.  The entire SEM system sits on this active vibration damping system, removing virtually all of the building and environmental vibration.  We are delighted that the Zeiss now achieves resolutions close to the ideal specifications of the instrument.

January 2016 - The Rheology of Hyaluronic Acid Used to Treat Osteoarthritis

Recently researchers at Cambridge Polymer Group in collaboration with OrthogenRx coauthored a paper on biosimilar medical devices and methods for supporting performance similarities in specifically viscosupplementation. In this paper, we compare an existing material cleared for sale in the US, against an ex-US device intended to replicate the performance of the existing material as a “generic device” equivalent to generic drugs.  The ability to market generic devices has only recently been made possible through changes in the regulatory mechanisms in the US, and this paper discusses this context and describes analytical methods for comparing the performance of viscosupplementation materials. Read the paper here. 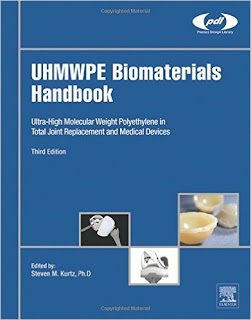 Link to purchase 3rd edition of the UHMWPE Handbook 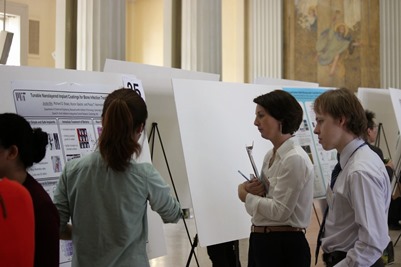 On March 11, MIT's Program in Polymers and Soft Matter hosted their 5th Annual Polymer Day. A poster session was held in the morning, and two CPG scientists, Dr. Yuri Svirkin and Adam Kozak, acted as judges and awarded prizes to the top posters. 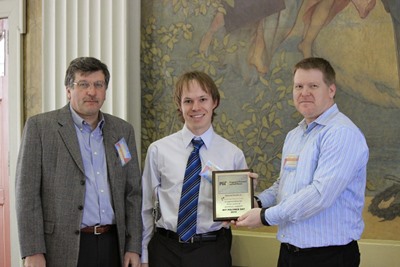 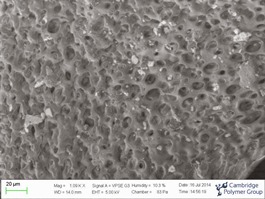 CPG recently acquired a variable pressure scanning electron microscope (SEM). This system is useful for failure analysis of components, in that the imaging is non-destructive. Additionally, the CPG system has a cold stage, which allows the control of relative humidity and temperature in the chamber, which is useful for imaging water-containing samples such as tissue and hydrogels.  The system acquired also has a large capacity chamber enabling in most cases visualization on entire devices and components.  More info

June 2014 - CPG Acquires an ESR for Analysis of Free Radicals

Electron Spin Resonance is used to determine concentrations of free radicals in foods and materials.  In the beer industry it is invaluable as a measure of how prone the beer is to "staling" where beer-derived free-radicals ultimately result in the production of carbonyl end products that result in the distinctive "off" flavor of old beer.  In the orthopaedic industry free radicals are induced by the crosslinking, or other manufacturing process, and therefore tracking these radicals is critical for determining ultimate stability of the materials.  CPG's acquisition of an ESR, along with the extensive calibration and validation we have performed, provides a valuable tool in determining likely stability of materials.

CPG was issued US Patent 8728379 in May 2014. This patent describes methods of making wear resistance, oxidatively stable polyethylene for orthopedic implants. The technology involves irradiating ultra high molecular weight polyethylene (UHMWPE) which contains Vitamin E as an antioxidant.  This patent is available for license. For more information, please visit our web site.

CPG researchers recently published a paper on a sensitive technique to quantify Vitamin E in UHMWPE used for orthopedic applications. The article is published in the Journal of Biomedical Materials Research.

CPG inventors were assigned US patent 8,637,063 for methods of making highly lubricious hydrogels that may be suitable for joint replacement or bearing surfaces. 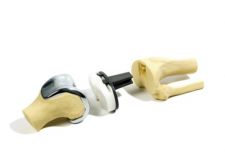 These hydrogels are manufactured in a novel manner by first forming an organogel, and then converting this organogel to a hydrogel.  This technology is available for license, learn more here.

CPG recently acquired a thermal gravimetric analyzer.  This tool provides the ability to separate compounds from a material by their evaporation point, and also examination activation energies and ash content.  In conjunction with the FTIR accessory, we can also determine the molecules begin involved.  This combination of tools expands our ability to perform deformulation work, particularly in complex polymeric systems.  Using the TGA in a "pyrolysis" mode allows identification of individual polymeric species, as well as additives in the final composition.

CPG inventors, along with inventors from the Massachusetts General Hospital, were assigned US Patent 8,569,395 for methods of making oxidation-resistant crosslinked polymeric materials. This patent discusses methods of incorporating antioxidants into UHMWPE to allow spatial control of crosslinking and antioxidant distribution, and has applications for total hip, knee, and shoulder arthroplasties. This technology is available for license. Learn more here. 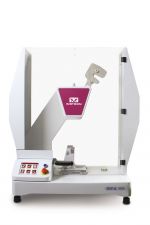 The recently purchased CEAST 9050 (Instron) impact tester can perform Izod testing in compliance with both ASTM D256 and UHMWPE testing per ASTM F648. 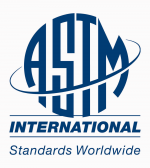 CPG researcher Dr. Stephen Spiegelberg was recently elected to the post of Recording Secretary for ASTM Committee F04 “Medical and Surgical Materials and Devices”.  Click here for more information on the committee.

US Patent 8530057  "Methods for making oxidation resistance polymeric material" issued this year. This patent discusses methods of making highly crosslinked ultra high molecular weight polyethylene (UHMWPE) resistant to oxidation by incorporating vitamin E, a naturally occuring antioxidant. This material is available for licensing, and has been cleared by the FDA and notified bodies in the EU for use in hip and knee devices.

Australian patent 2010206016 "Methods for making oxidation resistance polymeric material" issued this year. This patent discusses methods of making highly crosslinked ultra high molecular weight polyethylene (UHMWPE) resistant to oxidation by incorporating vitamin E, a naturally occuring antioxidant. This material is available for licensing, and has been cleared by the FDA and notified bodies in the EU for use in hip and knee devices.