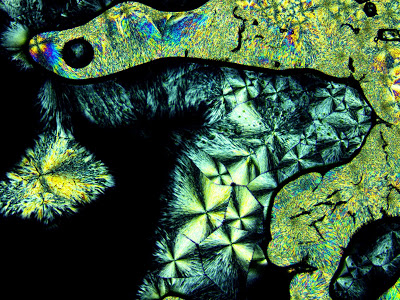 Polarized light microscopy is an effective tool to examine the crystalline structure of materials. In this technique, a sample is placed between two polarizers which are oriented 90 degrees to each other, or are "crossed". Light is transmitted through the polarizers and samples into an objective. Light travelling through the first polarizer becomes polarized in the plane of the polarizer. When it hits the second polarizer, no light will be transmitted as the second polarizer (also called the analyzer) is oriented 90 degrees to the first polarizer, unless the sample is optically anisotropic. Optically anisotropic materials are ones where the optical properties are different when probed in different directions. They have a different refractive index, or speed of light, in different orientations normally due to molecular alignment. Crystalline materials will show birefringence, as will oriented materials (e.g. stretched in one direction) if there is a notable chemical dissimilarity along one axis of the molecule relative to the cross direction (such as polystyrene). In this case, the light will be slowed down along one axis of its path, causing it to rotate as it passes through the sample. As such, a portion of the light will be transmitted through the analyzer, showing up as a bright spot. The amount of rotation depends on the thickness of the sample, the amount of orientation, the wavelength of the light, and the chemical nature of the material. Crystalline samples will often show the classic "Maltese Cross" pattern, such as those seen in the image of polyethylene oxide above. The dark sections in the crystalline structure are the portions where the orientation is either normal or parallel to the polarization axis of the transmitted light, so that the light is not rotated as it passes through the sample. The multi-colored ares in the image above are thicker sections of PEO, which causes the light to undergo multiple rotations, and will separate the white light into various colors, like a prism.

For more information on the theory of birefringence, go to this application note.