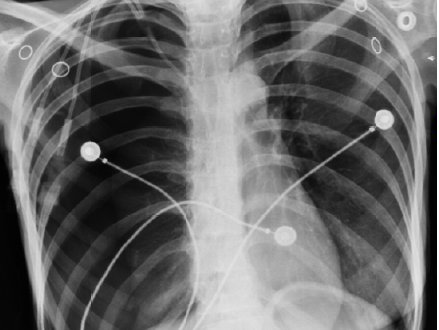 Radiopacity (or radiodensity) is the ability of a material or device to block or obstruct the passage of electromagnetic photons, normally in the form of X-rays. On an photographic X-ray image, a material with more radiopacity than the background will appear brighter than the background due to the unexposed emulsion not developing on the image. For historical reasons this relationship is preserved for modern digital images as well.  In general, the more dense a material is, the higher its radiopacity, although the nature of the specific atoms present (how electron dense they are) also plays a role. As such, metals and ceramics tend to have higher radiopacity than plastics and fluids. Lead, which has a density of 11.8 g/ml, is one of the more dense metals, and is why it is used as a shielding material for X-rays. The opposite of radiopacity is radiolucency.


Device manufacturers will often incorporate metals such as tantalum, tungsten, and stainless steel into devices for temporary or permanent implantation. Salts such as barium sulfate, zirconium oxide, and bismuth are also used to render plastics radiopaque.  Increasingly, regulatory agencies and device manufacturers are requiring quantification of the degree of radiopacity in medical devices to assure that these devices exhibit sufficient radiodensity for their application.


ASTM F640 "Standard Test Methods for Determining the Radiopacity for Medical Use"  describes test methods for quantitative assessment of the contrast a radiopacifier provides in a medical device, for either permanent implantation or temporary usage. In this method, the device is placed into an X-ray imaging system and imaged using standard times, voltages, and currents used for the X-ray diagnosis of humans. For two of the test methods, body mimics can be used, which may be animal, cadaver, or synthetic components that replicate the portion of the body where the device is to be placed. These mimics can be important because they change the energy of the incident x-ray photons and therefore can influence the apparent radiocontrast.  From the X-ray image of the device,  a densitometry system is used to measure the optical density difference between the sample radiopacifier and the background.  Traditionally this step would be performed using light passed through an x-ray film, but more often currently full digital x-rays images are analyzed directly using pixel intensities.

More information can be found on this application note