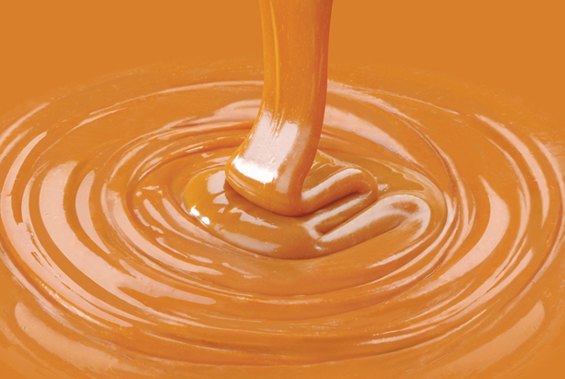 As the holiday baking season approaches, we are naturally thinking about caramel. At CPG, we have tested caramels and other food products in order to determine why some of these products have better ‘mouth-feel’ than others based on rheological assessment, a science sometimes termed ‘psychorheology’.

The discussion today, however, has to do with the chemistry of caramel. Caramel is the result of a decomposition reaction of sucrose (also known as table sugar) when it is heated to its decomposition temperature, between 170-186 C. Sucrose is a disaccharide made up of glucose and fructose. When it decomposes, water is released through a condensation reaction, along with glucose initially. Additional polymerization and isomerization then occurs, resulting in multiple high molecular weight compounds, as well as lower molecular weight compounds.

Sucrose, on the other hand, has a very mild odor, often not detectable due to its low volatility. The distinctive caramel smell is familiar to many polymer analysts who either deliberately or inadvertently decompose polysaccharides, generating many of the same compounds found in caramel.

The chemical reactions that occur at this stage are not really well known, even to this day. It is known that dimerization occurs, whereby two sugars reaction to form a single molecule containing three cyclical structures and a dianhydride. These structures are then believed to undergo hydrolysis reactions that product a compound called caramelan (C12H12O9), caramelen (C36H18O24) and. caramelin (C24H26O13), depending on the amount of water lost. These compounds form particles that have color centers believed to result in the color changes in caramel.

In addition to these reactions, free radicals are produced, which play a role in the tacky nature of caramels due to enhanced van der Waal’s interactions.

So although a great deal is not known about the chemical reactions in caramel, we can all perform our own enthusiastic home study on this wonderful cooking mistake.