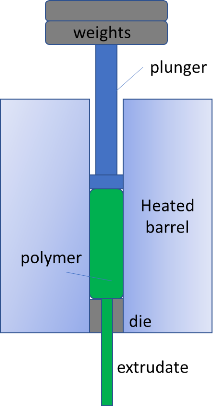 The certificate of analysis for polymer resins often includes a melt flow index (MFI) or melt flow rate (MFR), reported as grams of material/10 min under a specified temperature and load. This testing is normally performed per ASTM D1238 or ISO 1133 using a plastometer. A plastometer consists of a temperature-controlled cylindrical annulus through which a polymer melt is extruded by pressurization with a weight-loaded piston. The amount of material extruded through the die at the bottom of the annulus is measured by weight for a measured period of time. This mass, normalized by time, provides the MFI. It is easy to see that lower viscosity materials will result in a higher MFI, since more material can be extruded for a given amount of time.

How does MFI correlate to the molecular weight of a polymer? At CPG, we often measure molecular weight by gel permeation chromatography or dilute solution viscometry. Both these techniques involve dissolving the polymer in a good solvent to form a dilute solution, so that individual polymer chains can be interrogated directly (in the case of GPC) or indirectly (in the case of viscosity modification in dilute solution viscometry). In MFI testing, the polymer is not dissolved in a solvent, but rather is tested in the melt state. As a result, the MFI has a direct correlation to the polymer's melt viscosity. For polymer melts, the zero-shear viscosity h0 (or the viscosity at very low shear rates) has a relationship to the weight averaged-molecular weight as follows:

Given the inverse relationship between MFI and viscosity, it is logical to see that the MFI has a relationship to molecular weight as follows, which has been shown empirically for linear polymers:[1]

Bremner and Rudin found values of LLDPE had G values ranging from 2x10-20 to 1x10-24 (10 min/g(x+1)(molx)), and x ranged from 3.9-4.6. In a later article, Bremner found x values between 3.4 and 3.7.[2] The authors cautioned that this relationship becomes tenuous with polymers having variability in branching and polydispersity index. In order for the equation above to be valid, the authors’ note, the viscosity at the MFI conditions normalized by the zero shear viscosity should be a constant for the polymers in a given family. If not,  gel permeation chromatography is warranted.