Figure 1: On left, flax seeds, the source of linseed oil. On right, a representative triglyceride found in a linseed oil.

Linseed oil is derived from flax seeds (Fig 1; typically via pressing and solvent extraction methods). In the presence of oxygen, it polymerizes to form a rigid and hydrophobic solid through a highly exothermic oxidation reaction. This is often misleadingly referred to as “drying”; the process does not depend on evaporation of water but rather on the presence of oxygen to form crosslinks between adjacent triglycerides at points of fatty acid unsaturation (Fig 2). The resulting material is an excellent example of a naturally derived, crosslinked polymer whose properties arise from a complex mixture of its constituents and the processing conditions under which it is formed.

Due to its easy workability and advantageous “dry” properties, linseed oil is widely used in applications ranging from nutritional supplements (it is rich in Omega-3 fatty acids), as a binder in paint, and in linoleum. In fact, the name “Linoleum” derives from the Latin words for flax (“linum”) and oil (“oleum”). In its native state, linseed oil is a liquid composed of triglycerides (Fig 1) consisting of various combinations of fatty acids—the most common being linoleic acid, alpha-linoleic acid, palmitic acid, stearic acid, and oleic acid. 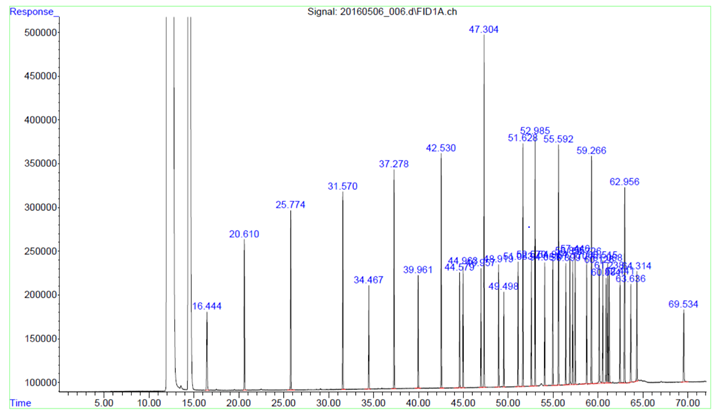 The fatty acid fingerprint of a triglyceride-based oil (Fig 3) is a valuable analytical tool for material/compositional identification, correlation to functional properties, good/bad analysis, and quantitative analysis. CPG has a variety of methods which may be leveraged for the analysis of oils—this includes techniques such as gas chromatography (which may be coupled to mass spectrometry; GCMS) which can be used to determine the fatty acid distribution for a sample.

Note that due to the highly exothermic nature of the polymerization process, linseed oil should be handled with care and is often treated as a fire hazard. Over the years many fires have been attributed to the spontaneous combustion of oil soaked rags, often abandoned after a painting job. Such rags are especially dangerous because they present a very high surface area and accelerate the oxidation reaction. If left balled up, temperatures may rise sufficiently high to ignite the entire mass. The Massachusetts Office of Public Safety and Security offers clear guidelines for the safe disposal of such materials.

Working with natural oils? Looking to better understand differences between performance of naturally derived materials? Contact us to see how our team may be able to assist in your project.