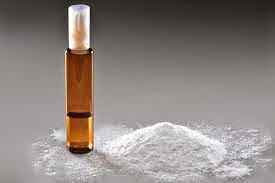 Polymer methyl methacrylate-based bone cement is commonly used in some hip and knee replacement arthroplasty surgeries to fix the metal components in place in the joint space. These cements are normally provided as two components. The first component, a powder, contains pre-polymerized PMMA powder along with some initiator (usually benzoyl peroxide) and a radiopacifier (usually barium sulfate). The second component, a liquid, is methyl methacrylate monomer along with some stabilizer. In the surgery, the operating staff will mix the two components together to form a viscous liquid, which is then injected or packed into the cavity behind or surrounding the metal implant. In the course of 5-15 minutes, the monomer cures after contact with the benzoyl peroxide.

As the residual unreacted monomer may leach out of the cement over time in the body, manufacturers and regulators are interested in knowing the amount of unreacted monomer present in polymerized PMMA. ASTM F451 describes a two methods for determining residual methyl methacrylate monomer in curing and cured bone cement, both based on gas chromatography with mass spectroscopy. In the first method, aliquots of freshly prepared cement are placed into vials containing water, and the monomer amounts that are elutable are quantified with GC-MS at time points up to around 30 minutes after start of mixing. In the second method, fully cured cement is exposed to water for a period of time up to 30 days, and the residual methyl methacrylate monomer is quantified in the water by comparison of peak heights to a methyl methacrylate monomer calibration curve.

The general method for GC-MS analysis of bone cement is discussed in this application note.