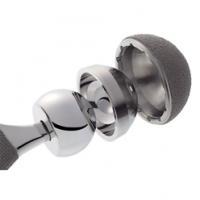 J&J Depuy, maker of the Ultamet Metal-on-Metal acetabular hip system, has announced that they will no longer market this and related metal-on-metal products after August 31st.  Since around 2007, the use of metal-on-metal has been in steady decline due to concerns about metal ion release and its possible association with pseuodo tumour formation in some patients. The main advantage of metal-on-metal components is the ability to use a thin liner, which allows the surgeon to use the largest possible femoral head without the removal of an extensive amount of bone from the acetabulum. A larger head normally will result in less subluxation and dislocation in patients prone to these phenomena. The lack of compliance in metal bearings, however, results higher wear rates and metal release if there is misalignment in the bearing. UHMWPE, the other bearing material of choice, has greater compliance, and thus can realign in vivo if there is misalignment.