Patients who won’t take their medications are one of the great frustrations of 21st century doctors.  According to The Annals of Internal Medicine, 20-30% of medication prescriptions are never filled, and 50% of medications for chronic disease are not taken as prescribed. The New York Times says this nonadherence to prescribed medication costs the American health care system $100-$289 billion per year.

While many doctors advise making pill-taking a habit (such as tooth brushing), wouldn’t it be easier if patients could just take one pill that released dosages slowly over time? Current swallowable drug delivery systems are problematic because they are composed of tough plastics. These thermoplastics may cause blockages in the gastrointestinal tract and are hard to remove in the event of an adverse reaction to the drug.

A Small Pill to Swallow

Researchers from Brigham & Women’s Hospital, MIT, and the Koch Institute for Integrative Cancer Research have created a new type of drug delivery material that is more biocompatible than thermoplastic. In collaboration with the Bill and Melinda Gates Foundation, they have developed a triggerable tough hydrogel  (TTH), strong enough to tolerate the stress of the GI tract and triggerable to dissolve in case of allergic reaction or negative side effects.

Hydrogels are polymer gels that swell when hydrated. When dry, the TTH capsule is small enough to be swallowed.  The capsule then expands in the stomach, preventing further passage down the GI tract. Researchers loaded the TTH capsule with the drug lumefantrine and found the device to successfully release the antimalarial in a controlled manner over a period of days. 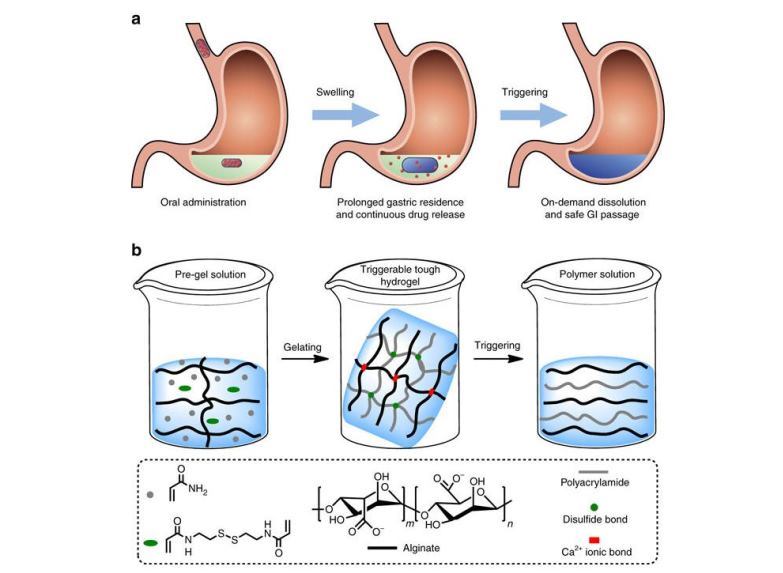 Traditional hydrogels are too weak to withstand the compressing and shearing forces of the GI environment; to strengthen their delivery device, TTH researchers created a double network hydrogel, composed of two interwoven polymer nets. One network is made of alginate (derived from seaweed); the other of polyacrylamide. When tested, this double network was strong enough to resist fracture, even under pressure from a razor blade. 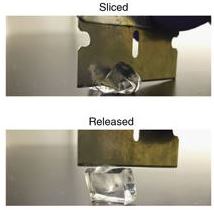 If the drug needs to be removed, the patient swallows biocompatible antidotes, ethylenediaminetetraacetic acid (EDTA, a food preservative) and glutathione (GSH), which dissolve the crosslinks between the polymer nets.

When tested, the TTH capsules lasted for up to 9 days in the stomachs of large animal models.  The next step will be additional pre-clinical studies to test hydrogel safety and stress resistance. Ultimately, researchers hope to find ways to extend capsule life, for dosage release over weeks or months.