Ever have a lump in your throat? You may have dysphagia, a medical condition whereby the patient has difficulty swallowing solids and liquids. There are multiple causes for dysphagia, ranging from gastroesophageal reflux to esophageal cancer. If not treated, pulmonary aspiration could occur when liquids enter the lungs by accident. Treatment of dysphagia depends on the source of the condition, but may be as simple as modifying swallowing behavior and changing diet, or it may require surgery for more complicated conditions.

We have often discussed the rheology, or flow behavior, of food products on our web site, and how it relates to taste and consumer perception. Rheology of food can also play a role in dysphagia.  Thicker liquids may be easier to swallow for dysphagia patients. To test this theory, researchers at the University of Cambridge, headed by Professor Malcolm Mackley, constructed an artificial throat to monitor flow behavior of liquids of varying viscosities when ‘swallowed’ by the throat. 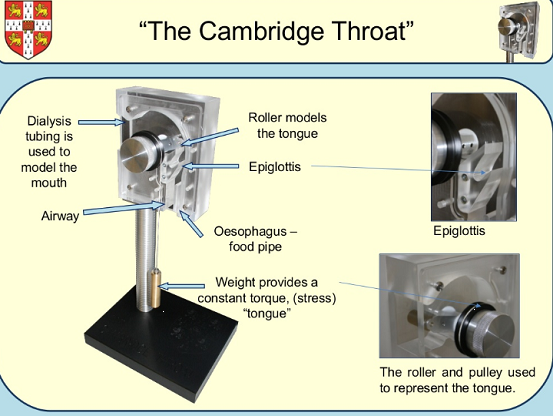 Dialysis tubing was used to model the throat, with rollers and counterweights representing the tongue. Optical access allowed the monitoring of the residence time of a bolus of fluid makes its way past the tongue and epiglottis. 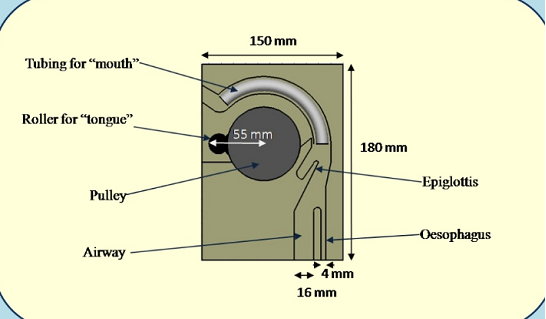 Various fluids containing common thickeners used in the food industry (xantham gum, nutilis) were investigated. Shear and extensional rheometry were performed, since both these modes of deformation would be present in the throat, and provided key viscoelastic properties for the fluids.

The authors concluded that the viscoelastic properties of the test fluids played a role in the amount of time it took for the fluid to travel from the epiglottis to the airway, which could affect aspiration and patient comfort.