Each year around Valentine’s Day, candy hearts make their appearance in bowls at homes and in offices. These multi-colored, message-inscribed candies have a distinctive aroma, flavor and texture that made our scientists interested in moving beyond the inspiring messages to a deeper look into the chemical and morphological make up of these candies.

Employing the techniques used for material deformulation and analysis in our laboratory, we first explored the morphology of these candies with scanning electron microscopy coupled with energy dispersive spectroscopy. We then analyzed the chemicals responsible for flavor and aroma with chromatography. Following this analysis, all samples were promptly eaten, a notable difference from our usual method of disposing of tested samples.

We first started with a review of the published ingredients of Sweethearts (Necco), the more recognizable form of candy hearts and one produced in the Boston area close to our laboratories, and often identified olfactorily when the wind is in the right direction. The main ingredients of Sweethearts are the following: Sugar, Corn Syrup, Corn Starch, Gelatin, Modified Food Starch, Natural and Artificial Flavors, Vegetable Gums (Gum Arabic & Xanthan) Artificial Colors (FDC Red #3, Red #40, Yellow #5, Yellow #6, Blue #1).

Have you ever wondered what your candy looks like at high magnification?  To the eye, a candy heart appears as a solid, somewhat porous form, but at the high magnifications obtained in a scanning electron microscope, the true detail of the candy is observed.  Comprised of sugar granules primarily ranging from 5 to 20 µm in diameter (see Figure 1), the candy heart has an intricate topography that contributes to the dissolution rate and crushing strength of the candy.  But how do the granules hold their heart form?  Candy hearts actually begin as a dough.[1]  The mixture of corn syrup, cornstarch, flavors, gums, and colors forms a dough that is later cut and printed with the signature messages.  The wet ingredients are dried off in an oven to form the solid candy we all enjoy.

For the antagonists out there claiming candy hearts are filled with chalk, we utilized EDS to determine the elemental composition of the candy. Not surprisingly, the analysis (see Figure 2) showed the candy consisted of carbon and oxygen, the two main elements in sugar (aside from hydrogen, which is not detectable by EDS). The spectrum showed a complete lack of calcium signal, indicating the absence of calcium carbonate (chalk) in the candy.

Knowing now that the candy hearts contain no chalk, and are composed of hydrocarbons, we were interested in what chemicals lead to their unique aroma and flavor. A commonly used technique for aroma analysis is head space gas chromatography (HS-GC-MS), a method we often use to look for residual solvents and trace volatile chemicals in materials.

In this technique, a sample of the candy was loaded into a sealed vial and heated under controlled conditions. The evolved gases were transferred to a gas chromatography column which separates compounds on the basis of boiling point and affinity for the stationery phase of the column. After separation in the column, the compounds were analyzed by a mass spectrometer which measures a characteristic electron impact fragmentation spectrum which can be used to “fingerprint” the compound and identify unknowns by screening against a NIST mass spectral library.

Plans were made for analyzing other colors, but the rest of the staff beat the chromatography team to the candy bowl. 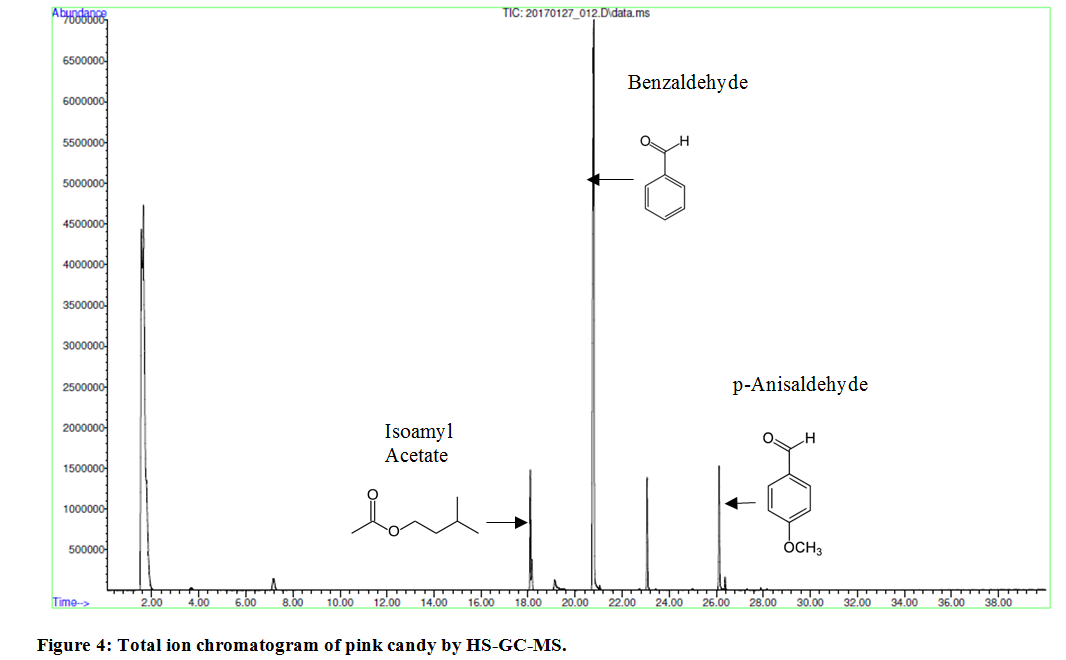