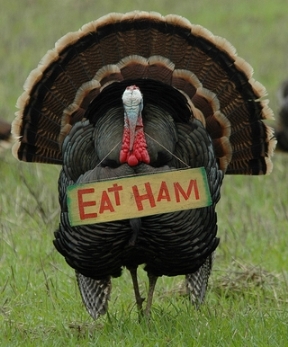 It’s that time of year when the turkey takes center stage, er, table. Although many claim Ben Franklin lobbied for the turkey to become the United States’ national symbol, Franklin was taken out of context. Franklin neither publicly championed the turkey nor opposed the bald eagle, and he characterized the turkey as “a little vain and silly.” Although the wild turkey was never a candidate for national symbolism, it has played a significant role in the culture of many Native American tribes, from sacred warrior to fabric to favorite meal.  Wild turkey was important to European settlers as well; historical record puts wild turkey on the menu at the first Plymouth Thanksgiving, unlike pumpkin pie, potatoes and cranberry sauce, which wouldn’t have been available to the Pilgrim colonists.

In addition to these cultural and culinary roles, Meleagris gallopavo has another claim to fame. Turkey feathers have inspired an international team of researchers to create a new type of structural coloring, a nanoparticle made of melanin and silica, called a “supraball.” Changing the thickness of the silica shell surrounding the melanin core determines the shade and intensity of color.

Chemical pigments, produced by the absorption of light by molecules, fade as they break down. Structural colors, created by the scattering of light by nanostructures, are resistant to bleaching and are less dependent on toxic materials than pigments. Although structural colors have obvious advantages to chemical pigments, obstacles remain to the mass production of structurally colored materials.

The discovery of the supraball technique could overcome these challenges. Supraballs tune core spacing without the need for a solution, and yield a full spectrum of colors. Additionally, the reverse emulsion process used to create the supraballs is simple and scalable. The nanoparticles cluster into supraballs at room temperature in water and octanol, and can be extracted as a powder.

Melanin is a dark biological pigment found in skin, hair, feathers (including turkey), scales, eyes, and some internal membranes. The use of melanin, with its high RI and broadband absorption of lights, increases the brightness and saturation of the supraballs. The spacing between the balls of melanin produces different colors, although only from normal distance; under a microscope, the supraballs are black.

The low RI clear silica shell forces the melanin cores farther apart or closer together, depending on the thickness of the shell.  This color tuning technique, using high-RI cores and low-RI shells to increase reflectance and brighten colors, was inspired by the hollow, high RI contrast melansomes of wild turkeys, and the hexagonal nonclose-packed melansomes of green-winged teal (see below). 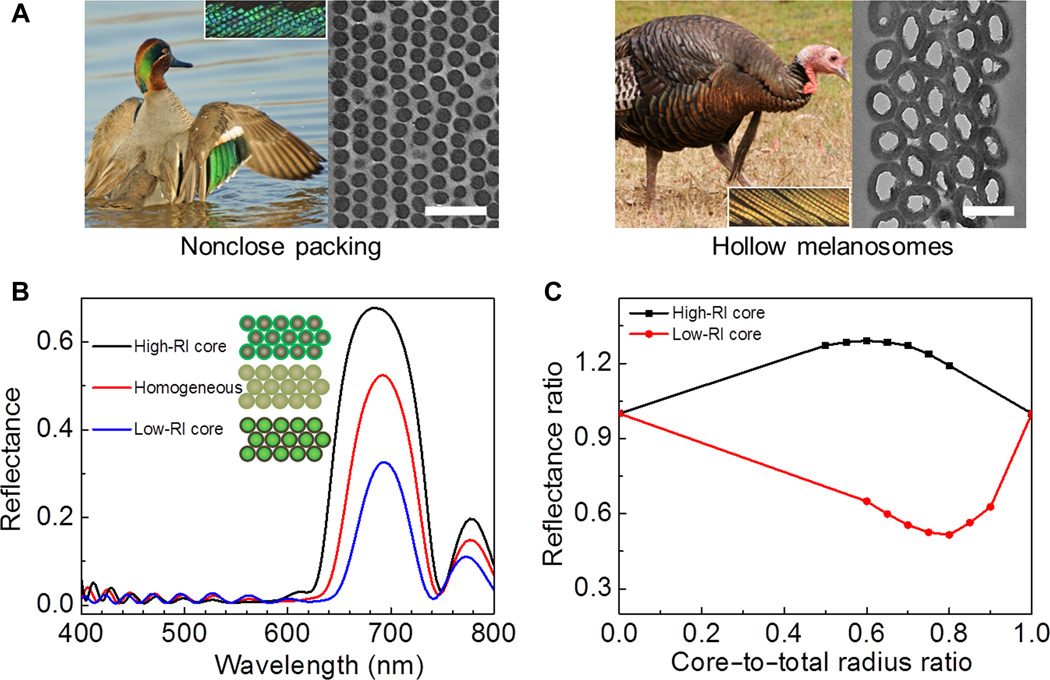 Researchers believe this technology can be replicated at the industrial scale, and has many potential applications. Since melanin can dissipate 90% of UV radiation, supraballs could be used to color UV-resistant inks. Supraballs could also be used in paints, plastics, coatings, and, since melanin is biocompatible, cosmetics and food.