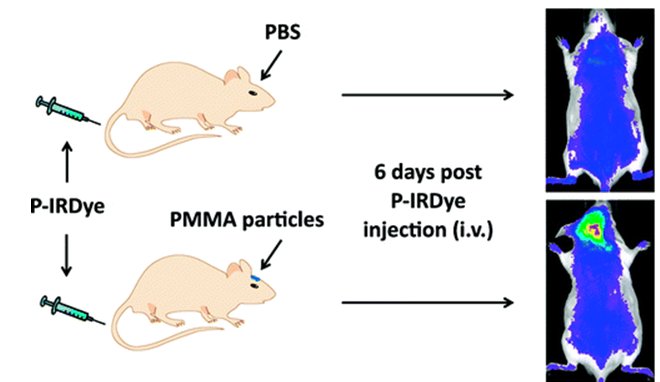 Researchers at the University of Nebraska Medical center recently published their results of a study in which they developed an optical imaging agent to detect inflammation due to wear debris generated from implants. In this study, a N-(2-hydroxypropyl)methacrylamide (HPMA) copolymer-based optical imaging contrast agent (P-IRDye) was developed and used for the detection of wear particle-induced inflammation employing a murine calvaria osteolysis model. The particle-induced osteolysis of calvaria was evaluated by H&E, tartrate-resistant acid phosphatase (TRAP) staining and μ-CT after necropsy. One-day post particle implantation, P-IRDye was administrated to the mice via tail vein injection. Live imaging of the animals 6 days after implantation revealed the preferential distribution and sustained retention of the macromolecular contrast agent at the site of particle implantation. Immunohistochemical staining and FACS analyses of the calvaria-associated soft tissue revealed extensive uptake of the HPMA copolymer by F4/80, Ly-6G (Gr1) and CD11c positive cells, which accounts for the retention of the macromolecular probes at the inflammatory sites.